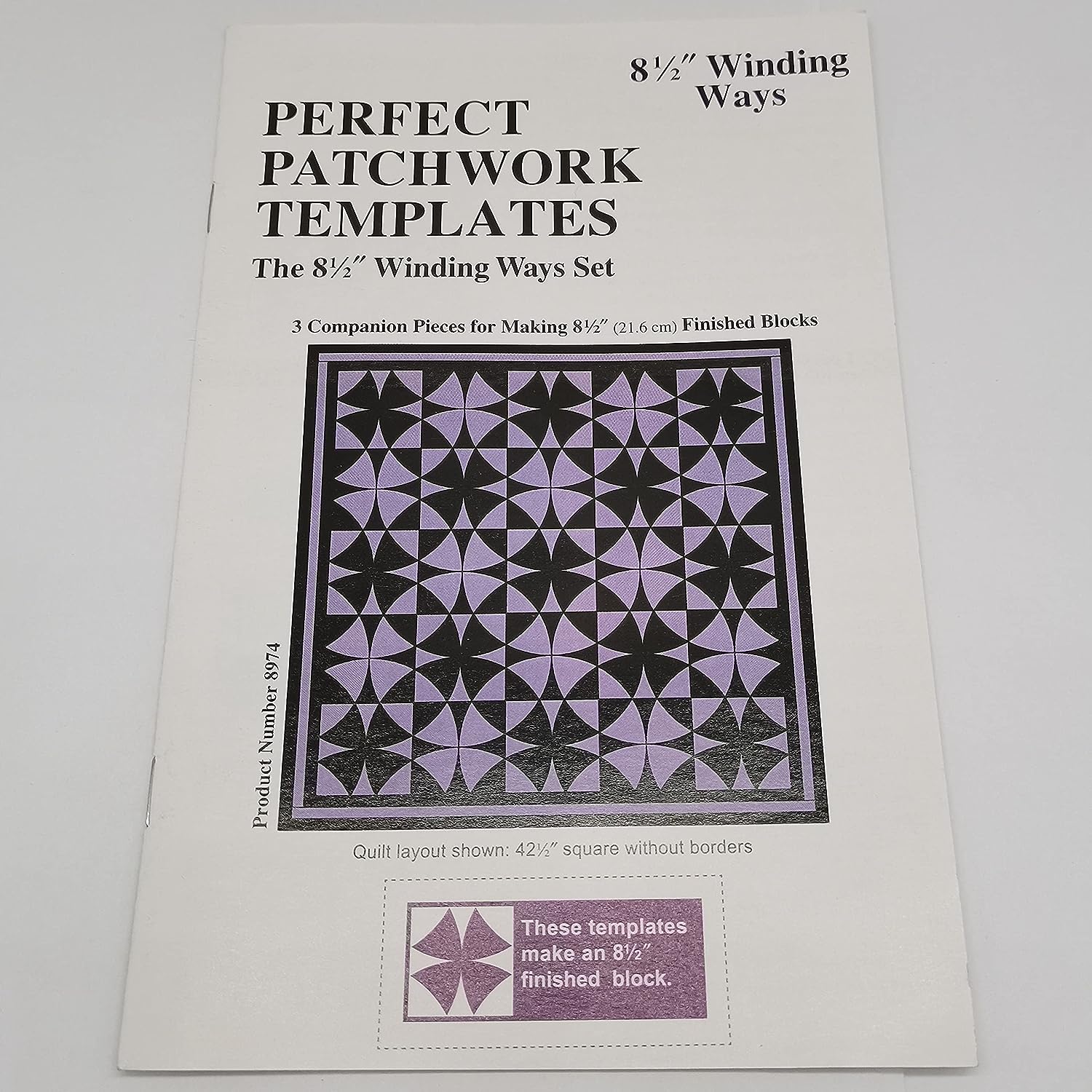 This 3 piece template set can be used to make a 10" finished size Winding Ways quilt block. The pattern is very similar to the Kaleidoscope pattern. This pattern is sometimes referred to as the Wheel of Mystery. The 1/4" seam allowance is marked all the way around each piece, with holes and lines to mark the seam allowance on each curve. The lines can be used to line up the middle of the curves perfectly and accurately. This is the most accurate way to use this pattern.

Among the most photographed and culturally iconic pieces of architecture, Casa Malaparte (known also as “Villa Malaparte”) owes its unique grandeur as much to its designer, Adalberto Libera, as to its owner, Curzio Malaparte, who wished for his home to be a pure expression – if not even “reincarnation” – of his own free spirit.

The writer, the architect, and the island of Capri

Even before the very inception of his beloved villa, the future owner’s opinions on the matter of houses and their making was already set:

I wish houses were all in beautiful stone, well squared, their terraces opening on the sky and its gulfs…

Curzio Malaparte – born as German-Italian Kurt Erich Suckert – is a complex, peculiar figure, known for his often shifting positions – most emblematic, his shift from fervent support of fascism to an equally staunch, partisan antifascist position; a writer, journalist, and poet, Malaparte was very active in literary and artistic circles for his entire life. His aforemented architectural vision encapsulates not simply the balance between landscape and housing, but between man and product as well, interior and exterior, as a whole, of design meant to be a statement of an identity first, and a mean of living second.

After his first spats with fascist figureheads, Malaparte was “exiled” to Southern Italy, where he first bought a small plot of land, specifically on a cliff (Punta Massullo) overlooking the Tyrrhenian sea, on the island of Capri. Malaparte was already familiar with Capri, as he’d first gone there to visit to his friend Alex Muntho, falling in love with the place.

Thanks to his friendship with Galeazzo Ciano, the then-minister of foreign affairs and admirer of Capri as well, often visiting the island with his wife Edda, Malaparte obtained a construction permit for the future villa; the complex’s construction began in 1938, ending two years later, by 1940, under the supervision of foreman Adolfo Amitrano. The building’s planning fell on Adalberto Libera, an architect already well known for his creative impulse and visionary approach to construction; due to the strong pull of both minds involved – Malaparte and Libera -its difficult to determine which one can truly claim paternity of the project.

The difficult construction of the “Casa come me”

During construction, the Villa took on the nickname “Casa come me” (House just like me), referencing how much Malaparte’s personality was being imprinted in the building’s style. In his own words:

The day I began building a house, I couldn’t believe I’d paint a portrait of myself.

The two-year construction was far from smooth, becoming as much of a case study as the house itself. Malaparte was very headstrong in his opinions, and more often than not he’d clash with Libera, himself with a clear and often uncompromising vision. When Libera first presented the writer with what he considered to be the final project, Malaparte dismissed it as little more than a rough draft; in fact, the majority of the house’s most distinctive features (such as the staircase and wing-like wall on the roof) are completely absent. Libera’s style, at the time, was a much more orthodox Modernism, and his vision for the house was no different.

However, Malaparte’s “intuitions” would prove to be, beyond mere formal gestures, a substantial change to the house’s inner workings, such as the aforementioned turning the terrace into an actual room, whose only walls (and roof) were the sail-shaped, white wall, formally joining the house’s rigid shapes to the gulfs and shores below (and protect the occupants from indescreet eyes); eventually, Malaparte began to outright distrust Libera, slowly phasing his ideas out of the picture. Where the house’s exterior exceeded Libera’s Modernism, the interiors gravitated around a number of concepts dear to Malaparte: his discussions with Alberto Savinio, author of the house’s painted majolicas; the Goethe-inspired lyre; the four, large walnut frames, evocative of “a beached Homeric ship” (per the words of Bruce Chatwin), and even expressionist art, whose use, combined with a “basolato” paving (typical of ancient Roman roads) made it look like an open road. This odd mix of ideas fully reflects Malaparte’s eclectic interests and personality, to the point that, once finished, the house presented almost none of Libera’s typical stylistic features.

In fact, according to recent letters and documents, the villa’s final project is to be entirely attributed to Malaparte; Libera’s projects would end up being completely different, not te mention unrealized. According to architect Uberto Bonetti, “the material realization of the whole building was executed under Your aesthetic and constructive guidance: plants, sections, et cetera.”

As retold by the Libera’s own son,

Curzio Malaparte tells Adalberto Libera that he’d like to have a “stairway to infinity” in his villa. One thing is to say it, another to design and plan that triangular staircase that truly opens up on infinity…to each their own, I’d say.

The legacy of Malaparte

The villa’s unique charm resides in its conjugation of architectonic quality and human characteristics, reflecting its owner’s paradoxical mentality.

The house, already famous, protagonist of many photographic sets and enjoying a celebrity status, saw, even after Malaparte’s death in 1957, huge popularity, as an inspiration for artists and designer everywhere. Malaparte’s will, regarding the house itself, sparked controversy among his heirs, as it stated:

Moved by my feelings of gratitude towards Chinese people and to strenghten bonds between East and West, I institute a foundation named “Curzio Malaparte” to create an house of hospitality, study and work for chinese artists living in Capri.

The heirs, unhappy with this decision, contested the will, beginning a legal battle at the end of which, overriding Malaparte’s desire, they donated the property to the Ronchi Foundation, juridical representative of the family, who still own it to this day.

Malaparte’s own youngest descendant, Tommaso Rositani Suckert, has reproduced its furniture (a table, a bench, and a library) for Gagosian gallery; the villa was used for movie shoots as well, specifically in “Il disprezzo” and “La pelle”, the latter detailing Malaparte’s very life.

A unique blend of styles

Villa Malaparte presents itself as a fascinating syntesis of differing inspirations, strongly separating it from contemporary buildings, tipically of Modernist or wholly Rationalist cut. At first sight, the house presents itselt as a smoothened parallelepiped, with its short side joined to a pre-colombian styled staircase that goes up the whole height of the house, ending at the base of the terrace. The house’s exterior, with the exception of the aforementioned white sail-like wall on the terrace roof, is in brickwork tinted in a distinctly strong, Pompeian shade of red.

The terrace, as described before, is technically the bare roof decorated with a curved plaster-white wall, redefining a spatial hierarchy so that a single walled space can exist – the plain air terrace in question, while masking the roof’s chimney and, when they decide to go up there, the house’s hosts.

The villa’s overall structure is composed of a large hall, sporting four wide windows on each wall, so that every one of them could offer a different panoramic view of the outside. Then we have a bedroom, a smaller complex reserved for hosts and visitors, called “the hospice”, and the bedroom reserved for (whichever he was courting at the moment) ladies; the house inner rooms are connected via a similarly grandiose, white staircase, allowing for easy passage from one level to the other. Every bedroom offered its occupants a different, suggestive vista, respectively over i Faraglioni, Punta Campanella, and the sea’s undisturbed horizon, where the waves touch the sky.

A particularly interesting case can be seen in Malaparte’s own studio, where the writer’s eccentricities come to be exemplified the best: the room is located at the base of the complex, directly – much like the bedrooms – overhanging over the sea below, adorned with a crystalline chimney, where the sea foams shines and reflects while the embers burn and the flames dance.

While possessing its own, unmistakable identity, and shaping the landscape around itas much as its own structure, Casa Malaparte is still considered as part of the Rationalist current, with some influences from Capri’s own local houses.

The roof with overhang and terraced function is a clear reference to its Rationalist roots, and if one were to give a closer look, even an echo of Le Corbusier’s school of building thought. The building seeks however its own harmony, jutasxposing the “broken” parallelepiped with the wedge-like staircase, merging with the rocks and creating its own sorroundings.

The impression of an ancient place

In 1980, Italian high-end architecture and design magazine Domus interviewed american architect John Hejduk, who relayed his own impression of the now deserted edifice:

Isolated, secluded, Villa Malaparte is a paradoxical item that consumes itself in its solitude, filled with unanswered stories. A shipwreck on the rocks, after the tide has lowered. A sarcophagus of secret voices, whispering unavoidable fates.

Hejduk’s description resonates with wonder and suspence, ensuring that, even after its owner’s departure, the house still preserves its charming mystique that made it so fascinating in the first place.

– Open to the public: No

We have detected that you are using extensions to block ads. Please support us by disabling these ads blocker.